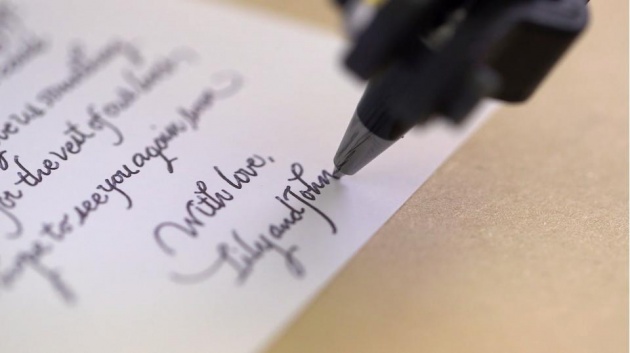 In this age of email, texts and posts, wouldn't it be nice to get an honest-to-goodness handwritten letter by hand-delivered mail? Real mail, not the "e" kind. Well, the trends says yes, but who's got time to write? Lately we've seen several services emerge that use technology to create old-fashioned looking mail that sets its senders apart and gets them noticed. One of the best examples of this we've seen comes from the New York City-based company Bond, which is using a robot to write letters that can authentically reproduce human handwriting. With the help of a calligrapher, the robot accurately imitates not just a person's individual loops and squiggles, but even the varying degrees of pressure that comes from a real hand. Clients are invited to submit your own handwriting which is then mimicked by the robot. And this being the 21st Century, users can order letters to be written and sent with the touch of a few buttons on a smartphone directly from Bond’s app. The seemingly unstoppable rise of technology is creating a counter-trend that is convincing some people to turn off, tune out and drop in by doing things like keeping mobile devices out of bedrooms and going on "quiet" vacations where mobile networks don't reach. Now that technology itself is advancing that trend, the handwriting they say, is on the wall.

Visit the original source of this trend at hellobond.com
Back to Trends Listings
Tweet