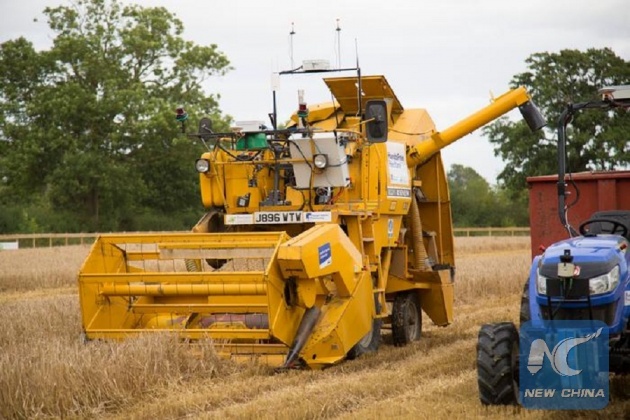 A farm field in Britain has been planted and harvested completely by autonomous vehicles and drones without any farmhands in sight. The hands-free crop farming was delivered in joint project by Harper Adams University in Shropshire and Yorkshire-based Precision Decisions, in an initiative partly-funded by the government agency, Innovate UK. The renowned agricultural university and Precision Decisions announced Friday the successful completion of "Hands Free Hectare", a project to plant, tend and harvest a crop using only autonomous vehicles and drones. A spokesman for Innovate UK said: "Using this method returned a yield of 4.5 tonnes of spring barley, against a predicted yield of 5 tonnes. It demonstrates that an entire crop can be grown from start to finish without people ever needing to go into the field to directly work the land. The team believes it's the first in the world to farm a crop in this way. They now plan to replicate the trial with a winter crop." A number of machines were used in the trial. A lightweight Iseki tractor did the spraying, drilling and rolling. The harvest was then completed with a Sampo combine harvester. Field work to support decision-making was also done autonomously. Drones with multi-spectral and RGB color sensors were used to take aerial images of the field, while a smaller Scout vehicle was used to video at crop level and physically take samples. These were sent back to the agronomist to analyze and assess what chemicals to apply and where, and when the crop was ready for harvest.

Visit the original source of this trend at news.xinhuanet.com
Back to Trends Listings
Tweet