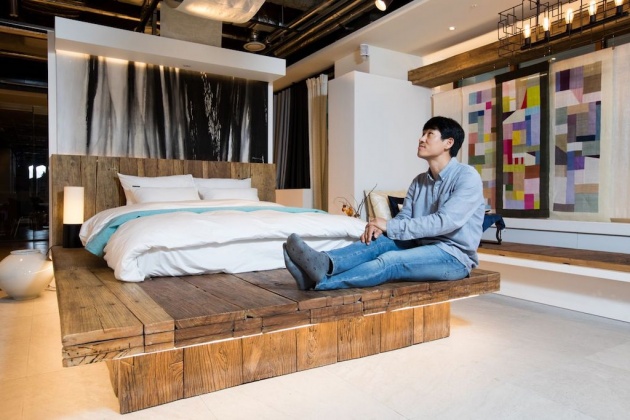 Lee Su-jin is founder of Yanolja, Korean for “hey, let’s play” the country’s most popular app for booking rooms at the short-stay lodgings, which South Koreans call motels. He’s trying to persuade owners to jettison their long-held image of sleaze, sex, extramarital affairs and suicide and upgrade facilities to appeal more to business travelers, families and tourists. “If all the motels relied on love, they’d starve to death,” 39-year-old Lee said in his office in Seoul’s ritzy Gangnam neighborhood. Yanolja has 17,000 hotels as partners and now employs 350 staff, half of them focused on research and development, including software and design. It’s valued at as much as 600 billion won ($547 million) and this year drew 60 billion won in investment from Chin Dae-je, a former CEO of Samsung Electronics Co. and technology minister. The app posted revenue of 68 billion won last year and is seeking an initial public share sale as early as 2020. The rise of apps and other disrupting innovations like Airbnb have pushed traditional hotel chains to adapt. In South Korea, larger hospitality companies have moved aggressively into related businesses such as restaurants and conventions to boost profits. A drop in visitors from China due to political tensions also played into the hands of local booking apps as hotels turned to them to try to reduce vacancy rates, said Byun at Kyung Hee University.
Lee said the Winter Olympics in February next year in Pyeongchang is an opportunity for the company to convince love hotels to become more tourist-friendly. His success may be watched closely in Japan, where the government is encouraging more than 10,000 love hotels to convert into lodgings for visitors to the 2020 summer games in Tokyo.