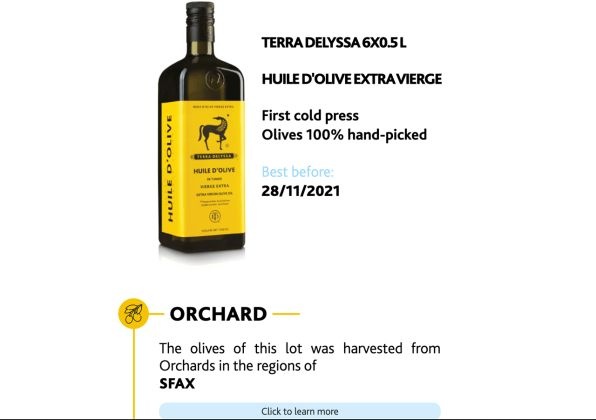 Low-quality or even fake olive oil has been a problem for quite a while—going back at least to the Romans. In extreme cases, the “olive oil” you’re buying isn’t even made from olives, but from nuts, seeds, or soybeans. And now, there’s a way to prove whether olive oil is real and high-enough quality for the “extra virgin” designation. To show its bona fides, Tunisian olive oil producer CHO has teamed up with IBM, using blockchain—an encrypted, decentralized database used to track transactions—to document key steps in a shipment’s lifetime. The technology will be able to verify the authenticity of extra virgin olive oil sold under CHO’s Terra Delyssa brand. The digital ledger records eight key details about each shipment, such as the orchard where the olives were grown, the mill where they were crushed, and facilities where the oil was filtered. Because a blockchain database has multiple copies, held by different parties, any change to the record has to be agreed upon by everyone involved—which means a single party can’t manipulate the records and fool you into thinking you’re buying legit olive oil when you’re not. Starting with oil from the November crop, due in stores in March, customers will be able to access this information by scanning a QR code on each bottle with their smartphone. CHO says the oil will be available at retailers in the U.S., Canada, France, Germany, Denmark, and Japan.