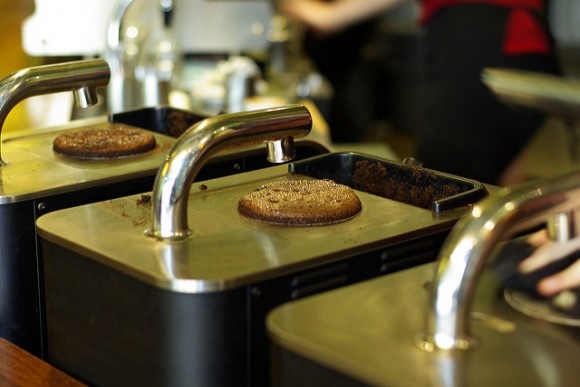 ShareSave to Favorites
Added 4 June, 2013
Starbucks is experimenting in some branches with the Clover machine, a one-cup brewer that borrows principles from the French Press and vacuum pot, among other preparation methods, and which allows for far greater variation of beans, roasts, and strengths. In a French Press, ground coffee is fully immersed in near-boiling water and left to brew, then the grounds separated out by pushing through a fine mesh. With a Vacuum Pot, water heated in a bottom glass globe is forced up into a second globe on top, mixing with ground coffee there. When pulled off the heat, the brewed coffee rushes back down into the bottom half, ready for drinking. In Clover’s Vacuum-Press, a little of both takes place. On the top of the machine there’s the top of a computer-controlled piston, into which the coffee is loaded; water from a fixed tap above is poured in, and then – after some stirring and brewing time – the piston pushes up, with a 70-micron mesh drawing the grounds up to the top of the machine, while a vacuum sucks the coffee itself out of the bottom, into a waiting container.
Visit the original source of this trend at www.slashgear.com
Back to Trends Listings
Tweet