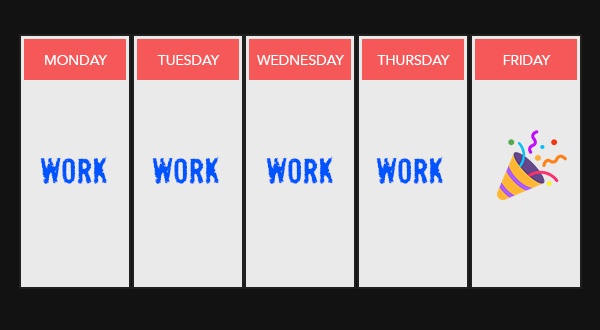 In 1908, a New England cotton mill instituted a 5-day workweek. The move inspired others to follow suit over the next 30 years until the Fair Labor Standards Act made 2-day weekends official in 1938. Now, over a century later, some tech companies are shaving another day off the workweek. Iceland’s national government trialed a 4-day workweek between 2015-2019, and found worker productivity either remained the same or improved. Even in Japan — where workaholism is so common there’s a word for overworking oneself to death, “kiroshi” — companies like Panasonic are letting employees opt in to the 4-day schedule. Should the extra day off be on Friday? Monday? Some other day? The only question left is when?

Visit the original source of this trend at thehustle.co
Back to Trends Listings
Tweet