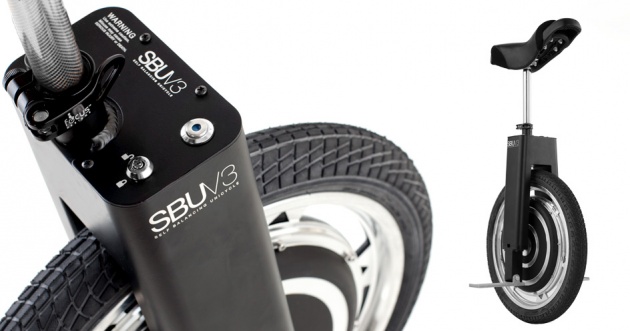 ShareSave to Favorites
Added 28 October, 2013
The Segway, a self-balancing two wheeled vehicle, promised a new kind of transportation, one that would transform the way we move around. While it is now used by shopping mall security people and for specialized tourist groups worldwide, the Segway never entrenched itself into people's lives. Reasons for this include its relatively steep price and its bulkiness, making it hard to transport. The SBU V3, a strange looking unicycle that uses a similar gyroscopic technology as the Segway, answers both these questions by being relatively inexpensive and ultra-portable. The device is unusual in that there are no handlebars or steering wheel. You just sit and lean forward to move and to the side to turn. It's makers say that anyone can become proficient in just about half an hour. The top speed of the SBU V3 is 12.5mph and it weighs just 27 pounds. Because you can easily take it on a bus or train, the SBU has the ability to change the way people commute. Will this new vehicle actually precipitate cultural change? We think it might.
Visit the original source of this trend at focusdesigns.com
Back to Trends Listings
Tweet