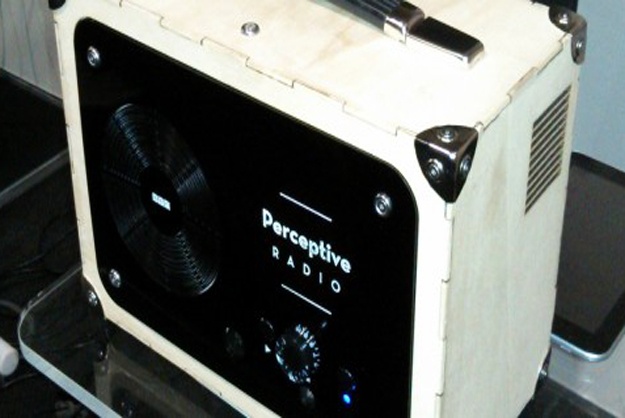 ShareSave to Favorites
Added 30 May, 2013
A radio that is able to change a broadcast depending on where you are and what you are doing has been demonstrated by the BBC. The Perceptive Radio, made by the corporation's Research & Development North Lab, is said to be a world first. The team produced a computer-generated radio drama where the script altered depending on factors such as weather. The proof-of-concept drama, which used a computer-generated voice for one of the characters, could adapt on the fly according to data pulled from external sources. For instance, it could make reference to local places which would differ depending on where in the world you were. Or it would mention weather conditions that were dependent on what was happening in the real world - such as replacing the phrase "it's sunny outside" with "it's raining". The model also included a microphone which can monitor background noise and determine whether to amplify certain sounds - such as speech - to improve the listening experience. "It's the early stages of looking at what next-generation broadcasting is," said Tony Churnside, a BBC technologist. He added that until now radio broadcasting has been a one-size-fits-all experience - with the same content being broadcast to all, no matter their individual situation.
Visit the original source of this trend at www.psfk.com
Back to Trends Listings
Tweet