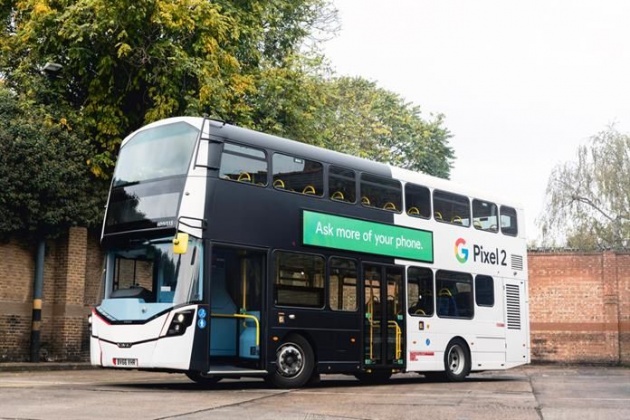 Exterion Media has launched London's first fleet of digitally "wrapped" geo-targeted buses with Google onboard as the first brand to use the ad tech. Each bus carries a digital screen on its side. The techology allows brands to run imagery and copy that is pertinent to the locations of the buses, for instance according to nearby shops or London landmarks. Google is using the buses to promote its newly-unveiled Pixel 2 smartphone, running a three-month campaign that displays geo-targeted messages to bus passengers across the UK capital. The campaign was conceived, planned and booked by Talon and OMD through Exterion Media, while Bartle Bogle Hegarty and Grand Visual were responsible for the creative and production respectively. The digital screen tech was developed by Hive, while Exterion and its partners worked closely with Transport for London, Go Ahead and Arriva to develop the technology. The roll-out of the bus screens is part of Exterion Media’s bid to become a digital media company focused on using data to connect with audiences. The company has developed innovations including lenticular displays and DX3, a soon-to-launch full motion digital network on London Underground.

Visit the original source of this trend at www.campaignlive.co.uk
Back to Trends Listings
Tweet