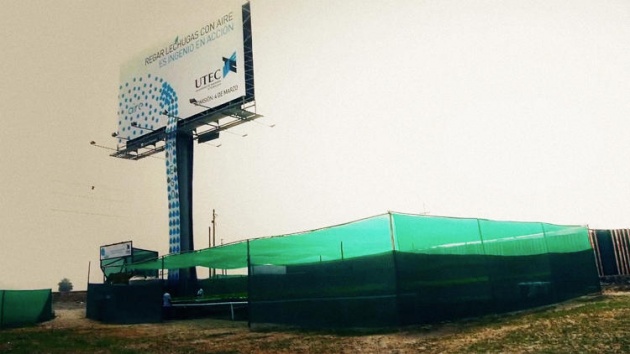 We are seeing more and more public advertisements that are interacting with their environments in creative ways that engage viewers. Recent examples include billboards in the UK that point out airplanes overhead, along with their destinations, and a metro ad in Sweden that reacted to trains pulling into the station. Hot on this trend comes a very creative billboard created by the University of Engineering and Technology in Lima, Peru that advertises for student applications by pointing out a widespread problem of chemically contaminated crops. And in a novel twist, the billboard itself is offers one solution to the issue it raises. In much of the world, ground water used for agricultural purposes is laced with toxic metals that leach into crops and get passed on to the humans that eat them. Lima's billboard is built with humidifiers that collect clean water from the air and funnel it through PVC piping to over 2,000 heads of lettuce that were planted nearby. The billboard project, called Air Orchard, is a great way of demonstrating one of the creative solutions being advanced by the school and because they give away the clean lettuce for free, it's advertising with real rewards for the people who see it

Visit the original source of this trend at www.youtube.com
Back to Trends Listings
Tweet