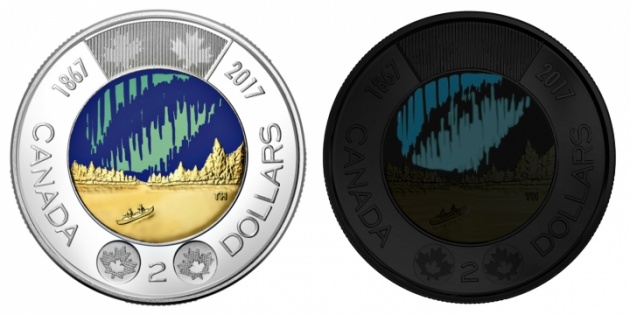 To celebrate the 150th anniversary of the Canadian Confederation, the Royal Canadian Mint has released three million glow-in-the-dark coins into general circulation. The $2 coins, or “toonies” as they’re colloquially called, depict two people in a canoe on a placid lake surrounded by trees, with the lights of the aurora borealis in the sky. Those Northern Lights illuminate when viewed in the dark, thanks to embedded luminescent ink, making this the first glow-in-the-dark coin in circulation. Mints around the world have released some numismatic oddities, whether the Ivory Coast’s 2010 commemorative coin adorned with a piece of mammoth tusk or Palau’s coin (also from 2010) celebrating 400 years of the telescope and containing an optical lens. The Royal Canadian Mint has even made noncirculating, commemorative glow-in-the-dark coins before. However, Canada has been on the cutting edge of actually putting such experiments into wide use, as with 2004’s 25-cent Poppy coin marking Remembrance Day and the end of World War I, which was the first circulating colored coin. Now, with “Dance of the Spirits,” Canadians can find a bit of Northern Lights magic amid their pocket change.

Visit the original source of this trend at hyperallergic.com
Back to Trends Listings
Tweet