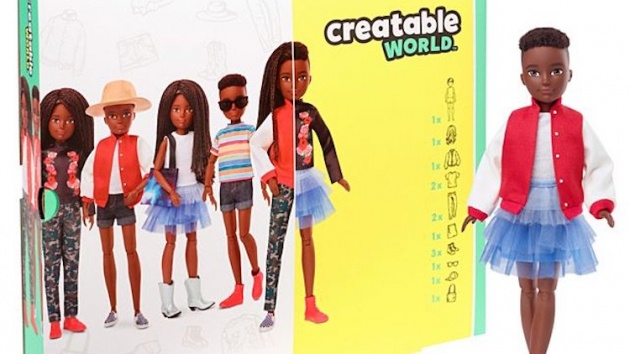 Androgyny has found its space on the toy aisle. Mattel has officially launched the world’s first line of gender-neutral dolls, marketed as Creatable World. Promising to make “doll play more inclusive,” Mattel offers a kit that lets kids make a doll that’s male, female, or neither. “In our world, dolls are as limitless as the kids who play with them,” reads a release from Mattel. The company says the Creatable World doll line is “designed to keep labels out and invite everyone in — giving kids the freedom to create their own customizable characters again and again.” Mattel suggested in a product demonstration for Time that the new dolls will appeal to kids who don't naturally feel like Barbie or Ken. There an 8-year-old child identified as Shi’a reacted enthusiastically to the toy. “The hair is just like mine,” Shi’a said. The doll has no gender-distinctive facial features and no built in makeup features like long eyelashes or blush, common attributes of dolls in the girls' aisle. The body is that of a child, with no masculine shoulders like a G.I. Joe and no breasts like a Barbie doll. The default hairstyle is a short cut that can be worn by boys and girls, and the doll also comes with a long hair wig. The toy also comes with a unisex wardrobe of hip 2019 clothes. Mattel priced the first dolls in the line at USD$29.99, and they are available in with a variety of skin tones and hair colors. The kits can be found at Target, Walmart, or Amazon.

Visit the original source of this trend at www.advocate.com
Back to Trends Listings
Tweet