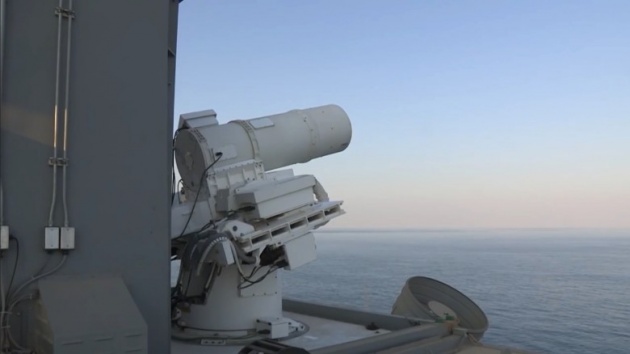 The LaWS, an acronym for Laser Weapons System, is not science fiction. It is not experimental. It is deployed on board the USS Ponce amphibious transport ship, ready to be fired at targets today and every day by Captain Christopher Wells and his crew. “It is more precise than a bullet,” Captain Wells told CNN. “It’s not a niche weapon system like some other weapons that we have throughout the military where it’s only good against air contacts, or it’s only good against surface targets, or it’s only good against, you know, ground-based targets — in this case this is a very versatile weapon, it can be used against a variety of targets.” LaWS begins with an advantage no other weapon ever invented comes even close to matching. It moves, by definition, at the speed of light. For comparison, that is 50,000 times the speed of an incoming ICBM. “It is throwing massive amounts of photons at an incoming object,” said Lieutenant Cale Hughes, Laser Weapons System Officer. “We don’t worry about wind, we don’t worry about range, we don’t worry about anything else. We’re able to engage the targets at the speed of light.” All the $40 million system needs to operate is a supply of electricity, which is derived from its own small generator, and has a crew of three. No multi-million-dollar missile, no ammunition at all. The cost per use? “It’s about a dollar a shot,” said Hughes.

Visit the original source of this trend at whnt.com
Back to Trends Listings
Tweet