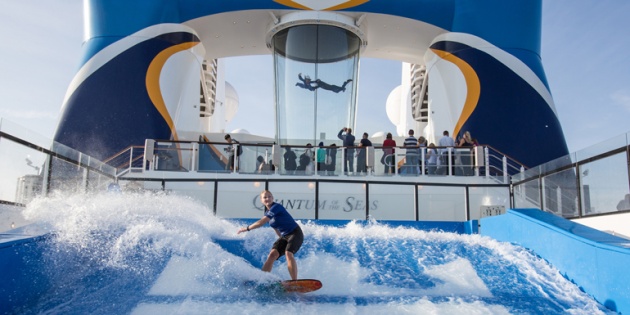 They say that imitation is the sincerest form of flattery, but the latest trends in cruising take obsequiousness to the next level by imitating some of the trendiest experiences around. With the launch of their latest ship "Quantum of the Seas", Royal Caribbean is looking to lead cruising into the next decade with all kinds of bells and whistles that cram many of the latest trends and fads into a single place, and float them on the water. While the ship doesn't offer skydiving, it does feature an indoor skydiving simulator, which is basically a high-powered vertical wind tunnel that lifts you off the ground and gives fliers the wind-in-the-face feeling of the real thing. And while you can't go surfing off the ship, there is a Flow Rider wave machine on board, where you can get actually get on a board and surf a wave. If you live in a city, you're probably familiar with the food truck trend, rolling their mobile kitchens to neighborhoods near and far. Well, Royal Caribbean is on that too, offering the world's first food trucks at sea, in the form of a simulated truck that serves hot dogs and sausages. But perhaps the coolest piece of fakery on Royal Caribbean ships are the "virtual balconies" that are now part of some interior staterooms. If you've ever been cruising you know that cabins with large windows and balconies are the most desirable accommodations. But they're also the most expensive as well. Unfortunately, the cheapest rooms don't even have windows at all. Royal Caribbean has answered this problem by installing high-tech, wall-size video screens in their windowless staterooms that display the real-time exterior view of the ship in high definition. The screens are framed by real curtains and even a safety railing that makes the virtual wall look very much like a real balcony. And they even pipe in sounds of the sea. Are bells and whistles like this the future of cruising? All of the trends are pointing in that direction.

Visit the original source of this trend at www.royalcaribbean.com
Back to Trends Listings
Tweet