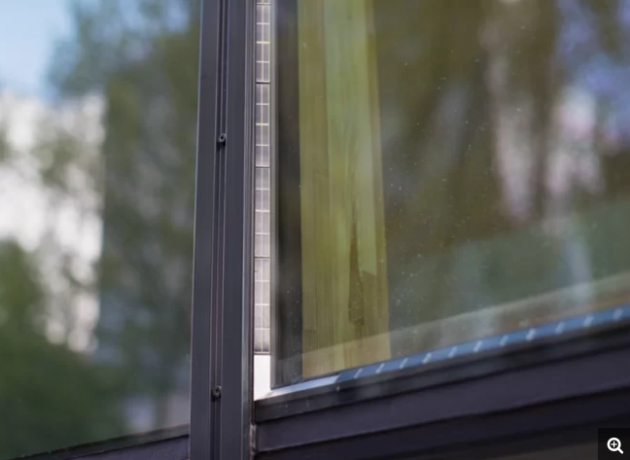 A tech startup on a mission to make modern commercial and housing estates energy neutral has outfitted the headquarters of a Dutch bank with the world’s first commercial, fully transparent solar-power-generating windows.
A close-up photo of one of Physee’s installed PowerWindows at Amsterdam’s main business district. Image Source: Jasper Juinen
The windows have solar cells installed in the edges at a specific angle that allows the incoming solar light to be efficiently transformed into electricity.
“Large commercial estates consume a lot of energy,” said Ferdinand Grapperhaus, co-founder and CEO of the startup, called Physee. “If you want to make these buildings energy-neutral, you never have enough roof surface. Therefore, activating the buildings’ facades will significantly contribute to making the buildings energy-neutral.”
The windows could generate 8 to 10 watts of power, according to Grapperhaus.
“This enables the user to charge a phone per every square meter [11 square feet] two times a day,” he told Live Science.
The first installation of Physee’s PowerWindows was unveiled in June in Eindhoven, in the south of the Netherlands. The headquarters of Rabobank, the Netherlands’ biggest bank, has been fitted with 323 square feet (30 square m) of the PowerWindows. The bank’s employees will be able to plug their smartphones into the windows using USB ports to charge their batteries, according to Physee.
Other buildings in the Netherlands are already lined up to receive the innovative solar technology, which has won Physee a place on the World Economic Forum’s Technology Pioneers 2017 list.