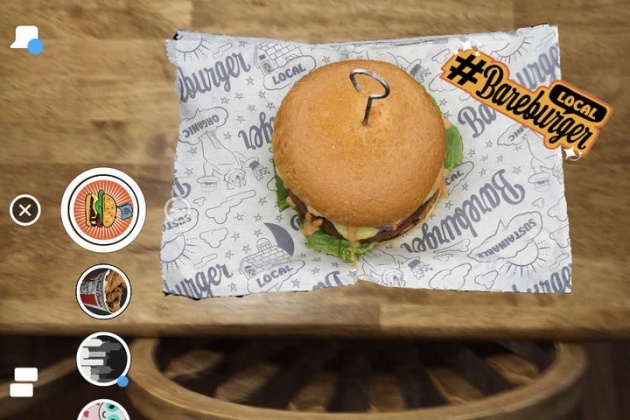 Start-up Kabaq is aiming to bring the next big technology-influenced change for restaurants and foodies since Instagram sparked a surge in food photography: an augmented reality menu. Burger chain Bareburger will be among the first restaurants to allow customers to see their meal right in front of them — before ever placing an order.
Using custom Snapchat World Lenses, customers can scan a Snapcode to place a virtual dish on the table, resizing and mixing it with other filters and, of course, snapping a photo to send to a friend. Created from images of a real burger, the augmented reality lenses allow diners to preview their dish from any angle. As Bareburger prepares to introduce an AR menu, the burger chain is giving out 5,000 Snapcodes that offer a sneak of the progress on that menu.
Anyone can scan the Snapcode to play with the Lens, but the foodie with the physical ticket can turn it in for the real version of that filter, for free. Kabaq is a food-focused AR company that launched in 2016. Co-Founders Alper Guler and Caner Soyer previously worked in the augmented reality space creating tools for interior design and furniture. The idea for Kabaq came after trying to explain the dishes at a Turkish restaurant to a friend, a difficult task without the help of visuals.