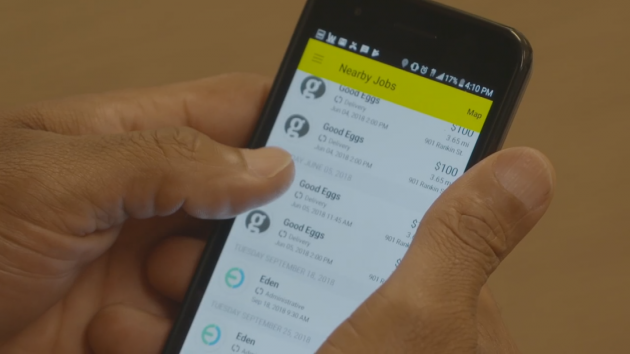 When Leversey Henry gets ready for work, he turns to his phone. He uses an on-demand staffing app to look for available shifts in his area. But not in just one industry and not just driving or delivery. “We’ve done warehouse; I’ve done some product marketing, as well as event coordination.” Henry answered questions on the app regarding qualifications and background ahead of time. Then whenever a gig pops up, it’s his for the taking. There are several on-demand apps offering gigs in industries that used to solely offer so-called traditional jobs. Areas like retail and restaurants. One survey predicts there will be more than 7 and a half million on-demand workers by the year 2020. “We’re finding that traditional employers will use gig work to sort of try people out. So we often find that rather than spending a bunch of time on going through resumes or looking through job boards, they’ll just bring people in and see how they perform and if they do a good job, off them a permanent position.”

Visit the original source of this trend at www.azfamily.com
Back to Trends Listings
Tweet