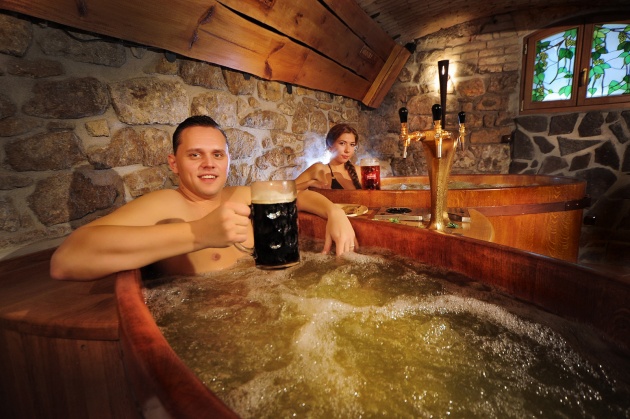 In the last decade, spas have become the "must have" amenities for high-end resorts worldwide. If there is a fancy hotel in some beauty spot in the middle of nowhere, you can almost be certain that it's offering hot stone therapy in Zen-like, patchouli-scented rooms. What's interesting about this trend is that intense competition has pressured the industry to come up with ever more esoteric treatments, from 24-carat gold facial masks at the Eldorado Hotel and Spa in Santa Fe, to a Chocolate Fondue Wrap at the Hotel Hershey in Hershey Pennsylvania. Throughout all this, however, one thing has remained constant: These spas are mostly visited by women. Sure, some men go for massages and manicures, but for the most part spas have a hard time attracting an entire half of humanity. Now, as even the most casual trend watcher knows, the world is also in the midst of another kind of revival: a renaissance of beer, as evidenced by all the craft- and micro-breweries that seem to be popping up everywhere. Now the latest trend in hotel spas is a mashup of these two trends with soaks in hot tubs filled with beer. The first one we spotted was at the Chodovar spa in the Czech Republic, where you get a 20-minute dip in a real beer bath. Now the spa at the Four Seasons Hotel in Vail, Colorado has partnered with a local brewery to offer similar treatments, build around a warm soak bath filled with beer. For 55 bucks you can sit in a bath that includes fresh Amber Ale. And happily they'll give you one to drink at the same time as well. The jury is out as to whether beer's yeast has positive medicinal effects – as some spas claim. But there is no doubt that both beer and spa treatments are growing trends that are now growing together.

Visit the original source of this trend at www.chodovar.cz
Back to Trends Listings
Tweet