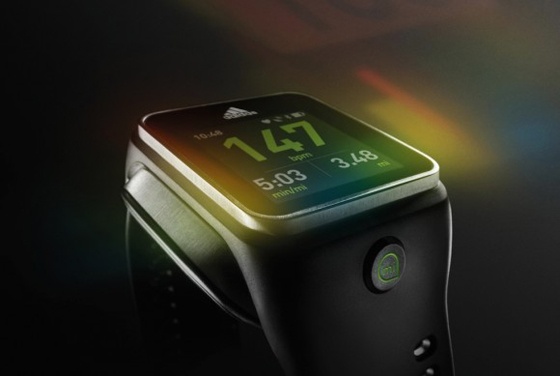 ShareSave to Favorites
Added 18 October, 2013
Nike+ FuelBand, Samsung Galaxy Gear, Apple iWatch... we are certainly entering the age of the activity-tracking armband. Adding further certainty that a large segment of the population will soon be wearing digital monitors on their arms, Adidas has now jumped into the market with its own version of the smartwatch. Called miCoach SMART RUN, the USD $400 device differentiates itself from the competition in that it works on its own, without the need to pair with the smartphone in your pocket to track location, speed and heart rate. Bells and whistles include an accelerometer, GPS, WiFi, and Bluetooth so that its wearer can track activity, either through the watch face or a pair of headphones. What is especially interesting about this trend is that it is developing at the same time as a pushback against privacy intrusions. This is important because smartwatches don't just tell their wearers what they are doing and how their bodies are performing, but they share that data with the associated companies running the hardware and software, among others. The battle for our wrists is also a battle for our big data. Will this slow the inexorable march towards wearable technology? Perhaps, but it probably won't reverse it.
Visit the original source of this trend at news.adidas.com
Back to Trends Listings
Tweet