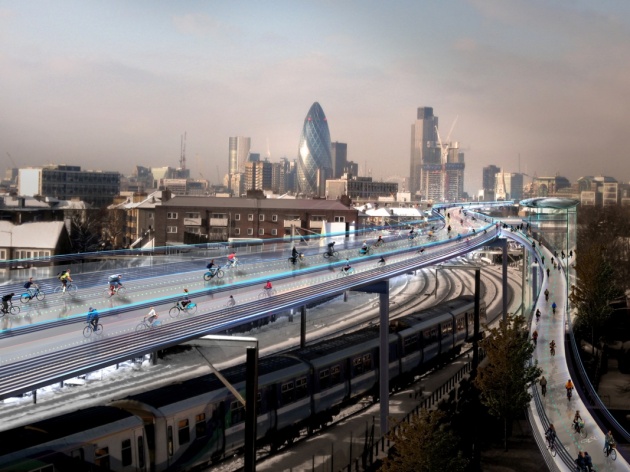 ShareSave to Favorites
Added 19 January, 2014
The London-based architectural firm Foster and Partners has put forward a far-reaching plan for bicycle lanes in the sky that would transform transportation in the city. The proposed SkyCycle network would be built above existing rail lines and cover up to 220 kilometers (100 miles) around London. The somewhat fanciful project was created to answer the challenge of an aging and over-capacity transport network that is facing 12 percent growth over the next decade. At the same time, it responds to the trend towards urban bicycling and cultural attitudes embracing sustainable energy solutions. Bicycling is growing in popularity in cities around the world, as evidenced by the success of so many bike sharing programs like New York's CitiBike. Whether this particular project gets off the ground, the fact that it was proposed by one of the most famous architectural firms in the world, and that it is getting serious attention from politicians, shows that the cultural conversation is getting even greener.
Visit the original source of this trend at www.fosterandpartners.com
Back to Trends Listings
Tweet