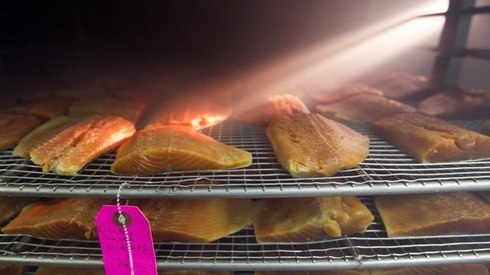 ShareSave to Favorites
Added 17 May, 2013
American demand for smoked seafood is part of a larger trend of infusing everything from salts and cocktails to fruit and teas with a kiss of smoky flavor. The federal government doesn't track smoked seafood consumption, but sales at 18,000 supermarkets, mass merchandisers and club chains jumped 17 percent last year, 12 percent in 2011 and 4 percent in 2010, according to market research firm Nielsen Perishables Group. And smoked seafood imports to the U.S. have been climbing, from $75 million in 2006 to $135 million in 2011, according to the National Oceanic and Atmospheric Administration. It makes sense that smoked seafood sales are growing. American diners have become more sophisticated about their seafood, and smoked seafood tends to be a higher-end product, says Gunnar Knapp, an economics professor at the University of Alaska-Anchorage who has studied seafood trends for more than 20 years. Smoked seafood also has become increasingly popular at upscale restaurants, where chefs apply the smoke themselves, says Howie Velie, a chef and associate dean at the Culinary Institute of America, in Hyde Park, N.Y. Using hand-held smoking devices that apply small amounts of hickory, mesquite, applewood and other wood smoke flavors into covered dishes, chefs are layering subtle smoky flavors in seafood such as tuna, cod, halibut, sea bass, grouper and lobster.
Visit the original source of this trend at www.azcentral.com
Back to Trends Listings
Tweet