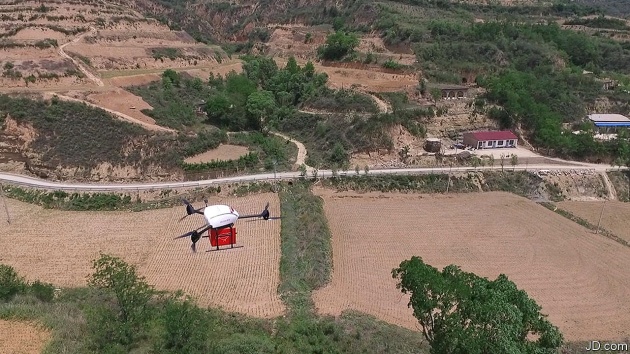 While Amazon, an American company, has put out numerous promotional videos on its drone-delivery plans, it will not start commercial operations until at least 2020. Meanwhile, JD.com has spent the past year building a real drone-delivery network covering 100 villages in rural China with 40 drones. Zhangwei currently receives a couple of drops each day, each box containing several packages ordered through JD’s shopping app. Thanks to JD’s drones, which operate autonomously with no human guidance but are monitored remotely, villagers in Zhangwei can expect delivery on the same day that they place an order, like urban shoppers in Beijing, New York or London. Suqian, which is near Zhangwei, was chosen as JD’s first drone delivery hub because of the region’s flat terrain, which makes drone flight easier. The city is also the home town of Mr Liu, JD’s chief executive, who started the programme there in an effort to speed its development. The firm runs two drone-dispatch centres. They cover 15 villages between them. There are more drone bases in Shaanxi province, covering a total of 100 villages.

Visit the original source of this trend at www.economist.com
Back to Trends Listings
Tweet