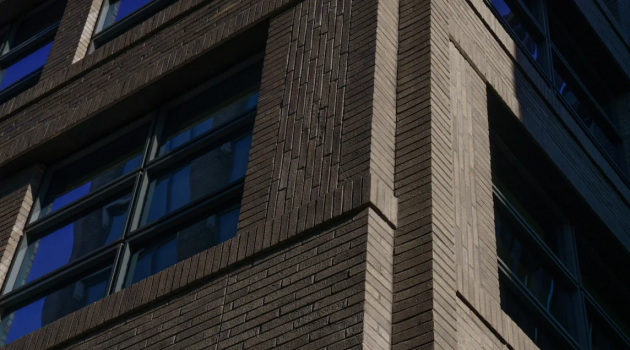 A new residential building on Manhattan's west side has been built with thousands of tons of demolition waste. Created by Dutch company StoneCycling, the recycled bricks contain 60% waste, including ceramic toilet bowls, roof tiles, and steel. "The West" was designed by Concrete, the Dutch architecture firm behind Citizen M hotels in New York, London, and Amsterdam. This is their first time working with StoneCycling’s “WasteBasedBricks”—and the first time the bricks have been used in the U.S.—but the architects are drawing on a strong legacy of Dutch brick building. “The canal houses in Amsterdam are all built by brick,” says Erikjan Vermeulen, a founding partner at Concrete. “We have a big brick tradition and history.” The architects used the bricks on the first seven floors of the building’s facade, and inside the lobby, where some bricks protrude just enough from the wall to spell out a poem about Hell’s Kitchen in morse code. From up close, every brick looks different. Some are smooth, others look and feel like sandpaper, others have tiny little craters on their surface, like samples from the moon. Each brick was brushed (by hand) with a thin, slightly reflective coating of glass particles, which gives the surface an ever-so-subtle shine, particularly when the sun hits the facade. Traditional bricks are made with clay (in Amsterdam, for example, it’s dredged from the city’s canals) and fired in kilns. The process is very energy-intensive and calls for a lot of extracted materials. StoneCycling bricks use less extracted materials, and one of the waste streams also has a lower melting point, so the bricks can be fired at a lower temperature, says Ward Massa, the company’s cofounder. (To lower their carbon footprint, the company is also planning to switch from natural gas to hydro-oxygen to power their kilns.)