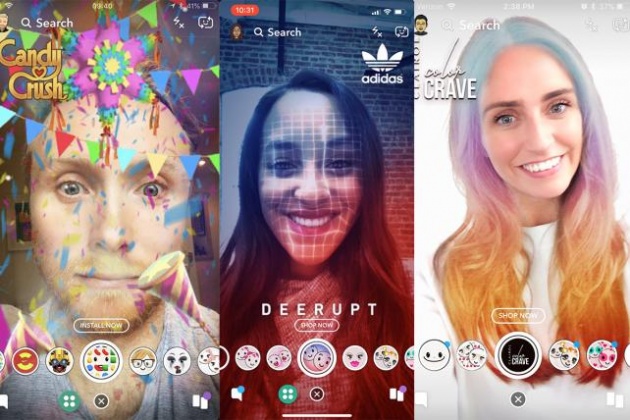 Snapchat is creating augmented reality shopping ads, blending selfies with commerce. The messaging and media app is calling its new creation—a blend of paid lenses with commerce capabilities—"shoppable AR." It has tested the ads with Clairol, Adidas, "Candy Crush" game maker King, and STX movie studio. The commerce lenses are the same as other lenses, and users add them to their videos the same way, but they include a button that leads to a shopping page, an app-install page, a video or a website without leaving Snapchat. Snapchat was an early innovator in AR with its lenses for people to overlay on selfies and videos, and it has attracted top rivals Facebook and Google to compete in the space. All the tech companies have now opened augmented reality studios to help outside ad agencies and brands create AR experiences for their platforms. Snapchat lets advertisers buy placement in its catalog of lenses, which pops up when people use the camera inside the app. The shoppable lenses are sold the same way as other lens ads, through the self serve automated ad platform or through a direct deal with the company.

Visit the original source of this trend at adage.com
Back to Trends Listings
Tweet