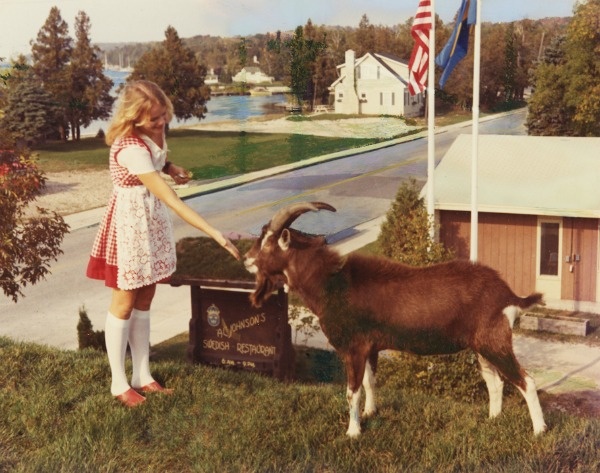 ShareSave to Favorites
Added 11 September, 2013
Rooftops have long been the battlegrounds of the green, sustainability and locavore movements, providing sustenance to the building's occupants. Planted roofs came first, offering natural insulation from heat and cold. Then someone had the bright idea to plant the roofs with edibles, which has the added effect of feeding the people below too. It doesn't hurt that you can't get more hyper local (another trend) then the roof right over your head. Then some buildings – notably the Royal York Hotel in Toronto – brought bees up to their roof tops to pollinate the edible gardens. Now, Al Johnson's, a restaurant in Door County, Wisconsin has taken the next logical step by raising goats on their rooftop meadow. Goats are nature's lawn mowers, and are also being used to trim the grass around airport runways worldwide (see other WikiTrend posts). Although this restaurant doesn't serve goat on the menu, but it probably won't take long for a restaurant in Portland or Brooklyn jump on this trend. Will roof-farmed animals be on menus soon?
Visit the original source of this trend at www.aljohnsons.com
Back to Trends Listings
Tweet