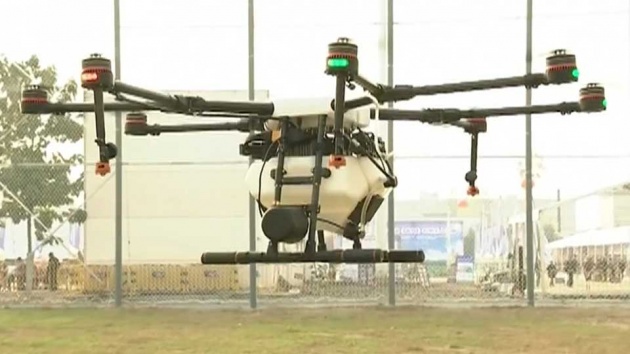 Many drone makers are going small, developing pint-sized UAVs packed with technology. But others are focusing on counting on large cargo carrying craft.
CGTN’s Mike Walter has more on such drone.
At nearly 12 meters long, China’s brand new AT200 drone is large enough to deliver a small car. And with the aircraft’s speed and weight-limit, that may be possible: it can fly more than 2,100 kilometers at a time, cruise at around 313 kilometers per hour, and carry 1.5 tons of cargo.
Its second public flight was earlier this month in northwest China’s Shaanxi Province, where designers showed off what they call the drone’s “one-click landing.” Click one button, and the unmanned aerial vehicle flies itself.
There are, however, some important features still missing.
“In the future, the drone has to be equipped with an air traffic response device, so that air traffic controllers will know exactly where the airplane is located in real time,” according to chief designer Ma Xiaoping.
Researchers at the Chinese Academy of Sciences spent 17 months developing the AT200, transforming it from an ordinary small plane to an unmanned cargo aircraft. Though impressive, the drone is not yet ready to roll down just any runway. It requires a specific set of conditions to operate, meaning it cannot yet take off and land at airports with runways built made out of dirt or grass, and those at high altitudes.

Visit the original source of this trend at america.cgtn.com
Back to Trends Listings
Tweet