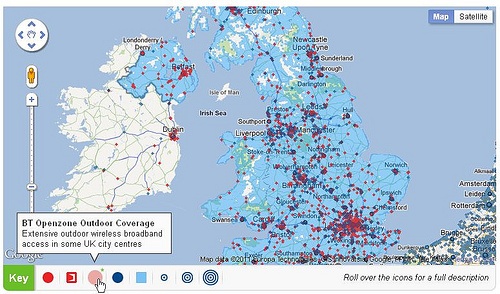 ShareSave to Favorites
Added 29 July, 2013
From New York City to remote Pacific islands, the towns, cities, and countries are investing in public Wi-Fi with the hope that it translates into better-informed residents and visitors. South Korea is arguably leading the charge when it comes to government-sponsored Internet access, with the national telecom LG subsidizing a free network country-wide that extends to cover its taxis and underground trains. Much of London is covered by "Cloud," a public Wi-Fi network that operates over 16,000 Wi-Fi hotspots throughout the UK. The Estonian capital of Tallinn is a lesser-known champion of Wi-Fi access; thanks mostly to the organization Wi-Fi.ee, Wi-Fi signals blanket the city. Many of those hotspots are maintained by private businesses, but funded through public-private partnerships. In Taiwan, visitors can register for the island’s free Wi-Fi upon arrival, presenting their passports to a tourist office before being granted access. Tokyo and Kyoto are much the same, except that visitors there receive temporary cards that grant them 14 days of free access. The days in which we all expect to be online everywhere and anywhere are almost here.
Visit the original source of this trend at skift.com
Back to Trends Listings
Tweet