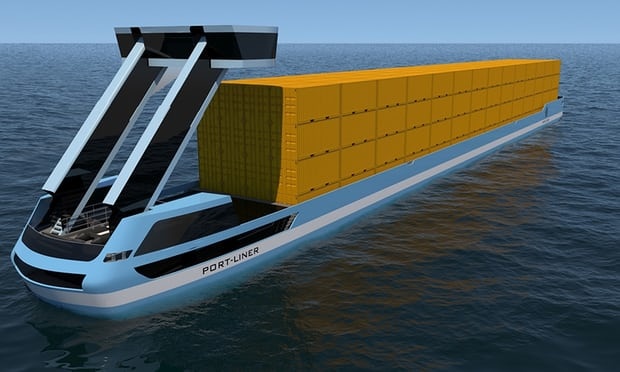 The world’s first fully electric, emission-free and potentially crewless container barges are to operate from the ports of Antwerp, Amsterdam, and Rotterdam from this summer. The vessels, designed to fit beneath bridges as they transport their goods around the inland waterways of Belgium and the Netherlands, are expected to vastly reduce the use of diesel-powered trucks for moving freight. Dubbed the “Tesla of the canals”, their electric motors will be driven by 20-foot batteries, charged on shore by the carbon-free energy provider Eneco. The barges are designed to operate without any crew, although the vessels will be manned in their first period of operation as new infrastructure is erected around some of the busiest inland waterways in Europe. In August, five barges - 52 metres long and 6.7m wide, and able to carry 24 20ft containers weighing up to 425 tonnes - will be in operation. They will be fitted with a power box giving them 15 hours of power. As there is no need for a traditional engine room, the boats have up to 8% extra space, according to their Dutch manufacturer, Port Liner. About 23,000 trucks, mainly running on diesel, are expected to be removed from the roads as a result.