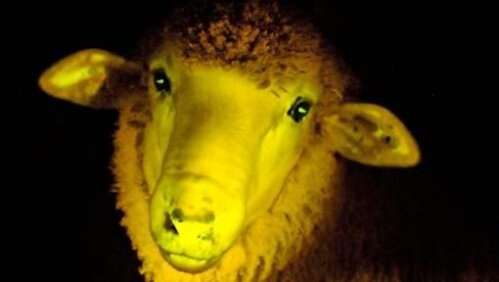 ShareSave to Favorites
Added 28 April, 2013
We are entering an age of glowing animals, created for the pleasure of their owners. The feat is achieved by taking a gene from a jellyfish that is responsible for production of a green fluorescent protein to create glow in the dark animal. The sheep were born last October at the Animal Reproduction Institute of Uruguay and are just like any other healthy normal sheep. The experiment started last year when the scientists introduced the green fluorescent protein to nine lambs. After more than six months of their birth the experiment looks to be a success. The modified sheep are not different from their unmodified counterparts other than the fact that they glow in the dark. Are cats and dogs next? Would you want a glow in the dark pet?
Visit the original source of this trend at wtvr.com
Back to Trends Listings
Tweet