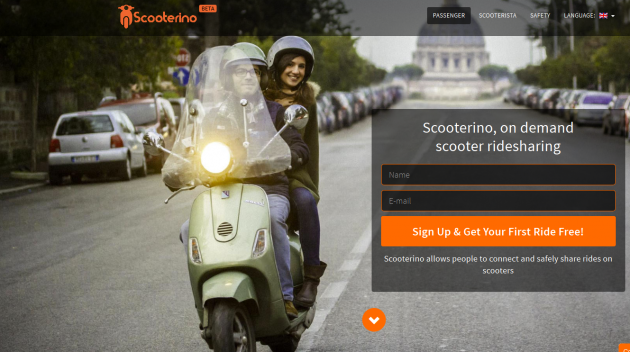 Uber is the darling of the so-called sharing economy, expanding globally and now said to be valued at over $40 billion. Not surprisingly, many other companies are creating similar business models that follow in the company's footsteps. Whether or not Uber itself turns out to be a trend or a fad, it's way of doing business is a trend that will be with us in one form or another for a long time. One of the latest Uber imitators is Scooterino, a quintessentially Italian service based in Rome that uses Vespa scooters rather than cars. In addition to being both cheaper and more environmentally friendly than cars, choosing Scooterino means that passengers can easily weave through Rome's dense traffic and presumable reach their destinations faster than they would in a more traditional taxi. And, of course, there’s the novelty of getting a scooter ride through Rome, which might make this concept viable as a tourist attraction as well. How long until we see this same sharing economy business model being rolled out in Thailand using tuk-tuks, or in India on bicycle rickshaws?

Visit the original source of this trend at scooterino.it
Back to Trends Listings
Tweet