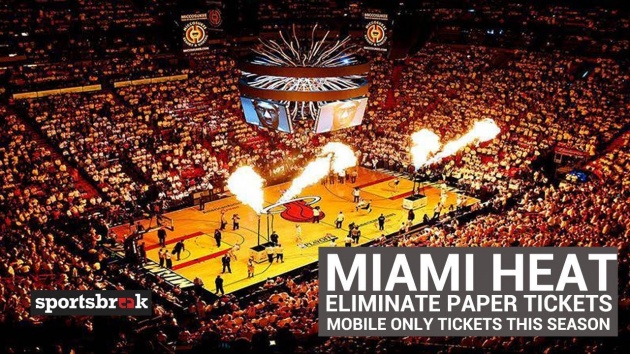 The Miami Heat announced Thursday that fans who attend home games this upcoming season will only be able to get through the gate with tickets on their phones. Fans who walk up to Miami's AmericanAirlines Arena on game night will receive Heat tickets on their phones, even though they are at the box office. In a statement, the Heat said they decided to adopt the system after finding that roughly one in three fans entered with a mobile ticket last season. The ticket on the phone is still transferable. Teams are gradually shifting to mobile tickets, they say, in part to reduce fraud, but also to get valuable information about the fan who actually winds up in a specific seat. Critics of the shift to mobile-only cite lack of ease with transferability and wanting to have a physical keepsake from the game. Some teams that have shifted to mobile offer season-ticket holders the right to have their tickets printed on paper, but it often comes at a cost. Just last month, the NHL's Montreal Canadiens announced the change to digital entry. The team offered paper tickets for the season for an additional charge of $118, plus taxes and fees.

Visit the original source of this trend at www.espn.com
Back to Trends Listings
Tweet