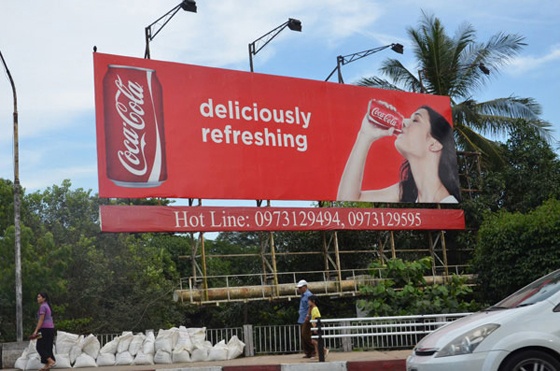 ShareSave to Favorites
Added 18 June, 2013
It's the beginning of the end for the good citizens of Myanmar as their trade doors open to fatty fast foods and sugary fizzy drinks. Coca-Cola is now joining Unilever, General Electric, Philips, Visa and just a handful of other big global multinationals in finally doing business in Myanmar, formerly known as Burma, the poorest and least-accessible nation remaining in Asia. North Korea and Cuba are the only two remaining countries in which Coke still doesn't do business. After more than 60 years away, Coke plans to spend $200 million in Myanmar over the next five years. Earlier this month, it opened a new bottling plant outside the commercial capital of Yangon. Coke's brand messaging in Myanmar reportedly centers on the drink as "delicious and refreshing." Apparently, commercials about Stevia and obesity are still well down the road.
Visit the original source of this trend at www.brandchannel.com
Back to Trends Listings
Tweet