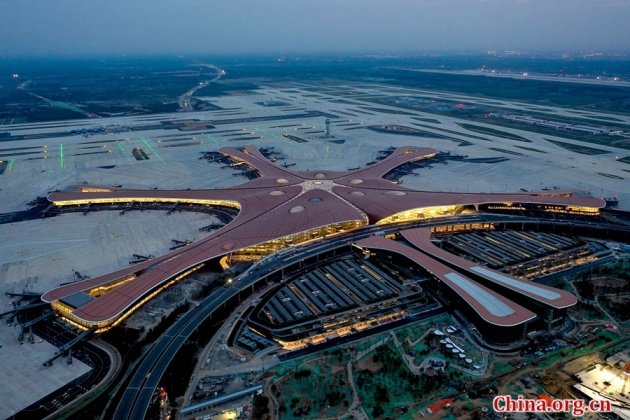 Construction of the Beijing Daxing International Airport was completed as scheduled on Sunday, and preparations have started for the operation of what is expected to be one of the world's busiest air traffic hubs. In the first half of this year, projects including the airport's main construction, air traffic control and aviation oil facilities, and interlinked expressways and high-speed railway have been completed on schedule and given the green light to be put into operation. "It is the world's largest integrated transportation hub. The terminal building is also the world's largest built with a seamless steel structure, boasting the world's first design of double-deck departure and double-deck arrival platforms," said Bai Henghong, director of the Beijing Daxing International Airport project command of Beijing Construction Group. It is forecast to see its passenger throughput reach 72 million in 2025, and further increase to 100 million by 2040, when it is likely to surpass Hartsfield-Jackson Atlanta International Airport in the United States to become the world's largest airport in passenger throughput.

Visit the original source of this trend at www.china.org.cn
Back to Trends Listings
Tweet