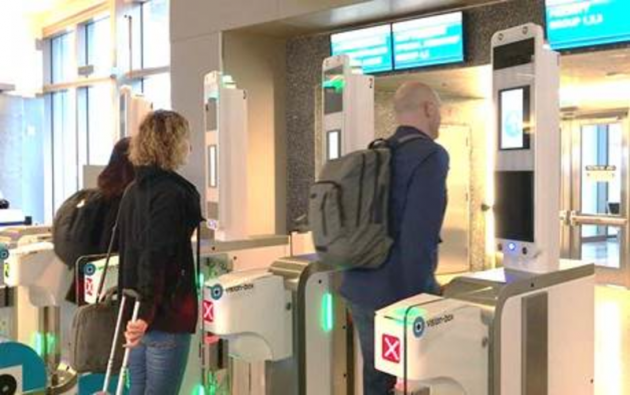 German airline Lufthansa began one-step biometric boarding on some flights out of Los Angeles International Airport with the goal of speeding up—and simplifying—that whole getting-on-the-plane thing. Passengers approach the self-boarding gate right right before boarding the plane and pause: Within seconds, facial scans are sent in real-time to U.S. Customs and Border Protection (CBP) for verification, and if all goes as planned, a passenger is recognized as "boarded" and can proceed down the jet bridge. Following the trial, the airline says it will roll out biometric boarding at other airports around the country. So long, pesky boarding passes. Hello a further loss of privacy! Lufthansa isn't the only airline to get into biometric boarding in the U.S.: JetBlue and Delta have been testing the process at Atlanta and Boston, while British Airways also offers biometric boarding for some international flights out of LAX. We hear Qantas and Korean Air aren't too far behind, and Dan Tanciar, deputy executive director of the CBP, told USA Today last month that biometrics for international travel could become the new normal within the next four years.

Visit the original source of this trend at www.cntraveler.com
Back to Trends Listings
Tweet