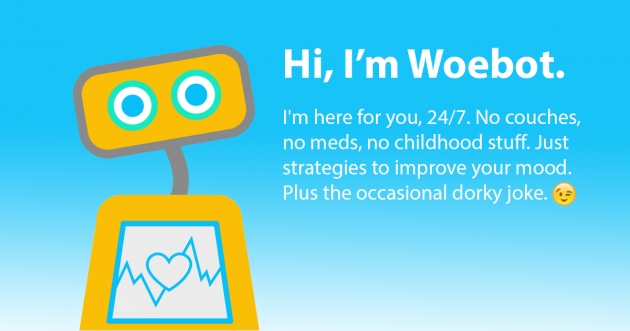 Researchers have developed a chatbot that has been shown to reduce the symptoms of anxiety and depression. 'Woebot' engages in 2 million conversations a week. Dr Alison Darcy, founder and chief executive of San Francisco-based Woebot Labs, said the AI helps people talk about their emotions. 'Part of the value of Woebot is you can get things off your chest without worrying what the other person thinks, without that fear of judgement,' she told the Washington Post. 'We wanted it to make an emotional connection.' Launched in June, Woebot is programmed to mimic human conversation and primarily gives advice and offers companionship and self-help guidance to users. 'He does a good job for people who are really distressed,' Dr Darcy said. 'He's not as good for people who don't have a lot of stuff they're upset about or have something they need to talk about ... He's not so good at chitchat.'

Visit the original source of this trend at www.dailymail.co.uk
Back to Trends Listings
Tweet