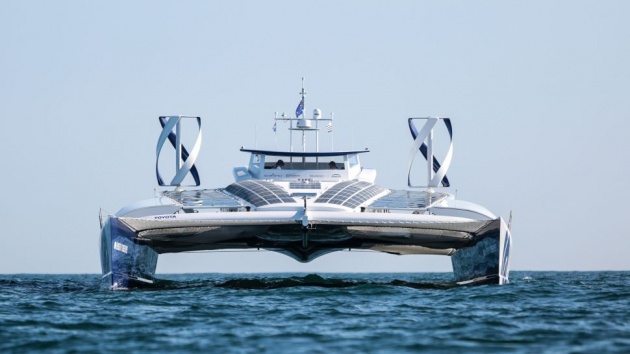 Toyota is sponsoring the world's first autonomous hydrogen-powered ship on a six-year world tour. The specially adapted race boat, Energy Observer, uses solar, wind and wave-generated power – as well as carbon-free hydrogen generated from seawater. The base technology already exists for use on land, where it helps overcome the problem of intermittent power supply from renewables, but this is the first time it's been used at sea to produce hydrogen 'live' during stopovers and navigation. The ship creates hydrogen by demineralizing seawater (removing salt and ions), then separating the oxygen and hydrogen through electrolysis. The hydrogen is compressed at 350-700 bar, then stored in tanks ready to be used in the energy stacks when needed. A team of over 30 people, including architects, designers and engineers, worked to prepare the ship for its six-year voyage, in which it will navigate 50 countries and stop in 101 ports of call. A northern European tour is scheduled for next year, including the UK. The crew aims to reach Tokyo in 2020, in time for the Olympic Games.

Visit the original source of this trend at www.techradar.com
Back to Trends Listings
Tweet