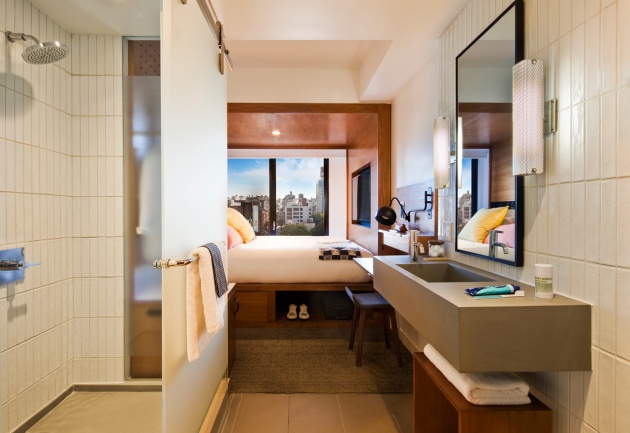 ShareSave to Favorites
Added 8 April, 2015
In major cities like New York, London and Tokyo the most precious amenity, of course, is space. For travelers to these cities, it can sometimes seem as though hotel rooms are getting smaller and smaller. Well, it's not your imagination because in fact, city hotel rooms have been shrinking. That's because the latest trend in hospitality is "micro-hotels": Big-city hotel rooms are about to get even smaller. One of the leaders in this trend is a new brand called Tommie, which is building tiny 160-square-foot guest rooms designed for travelers who don't plan on spending their vacation holed up in their rooms. While they are not quite as small as Japan's infamous capsule hotels, where guests sleep in coffin-sized modules placed in a wall, these hotels cleverly pack all the features of a good-quality hotel room into a tiny, pocket-sized space. Think of a really, really upscale hostel – but one in which you don't have to share your bathroom. Tommie's hotel rooms feature customized furniture, like desks that fold up into the walls. Instead, the emphasis is placed on common areas, downstairs and on rooftops, where guests are encouraged to gather and meet each other. The first two Tommie hotels are opening in New York City this summer, and in 2016.
Visit the original source of this trend at www.tommiehotels.com
Back to Trends Listings
Tweet