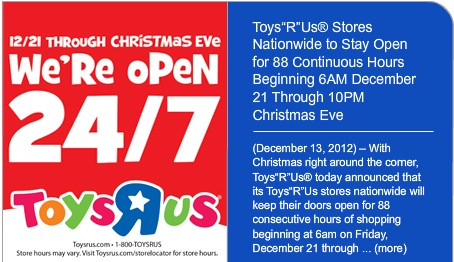 ShareSave to Favorites
Added 17 December, 2012
Macy's has announced it will be open 24 hours a day, starting at 7 a.m. on Friday, December 21, and running through 7 a.m. on Sunday, December 23. And now comes the announcement by Toys R Us that it will stay open nationwide for 88 continuous hours beginning at 6 a.m. on December 21 through 10 p.m. on Christmas Eve. In fact, the Toys"R"Us global flagship in New York's Times Square is going for an even bigger record. It opened its doors for 24/7 shopping at 7am on Sunday, December 2, and is keeping them open until 10pm on Christmas Eve, "providing New Yorkers and visitors alike a record-breaking 543 consecutive hours to shop around the clock for all their gift-giving needs."
Visit the original source of this trend at www.brandchannel.com
Back to Trends Listings
Tweet